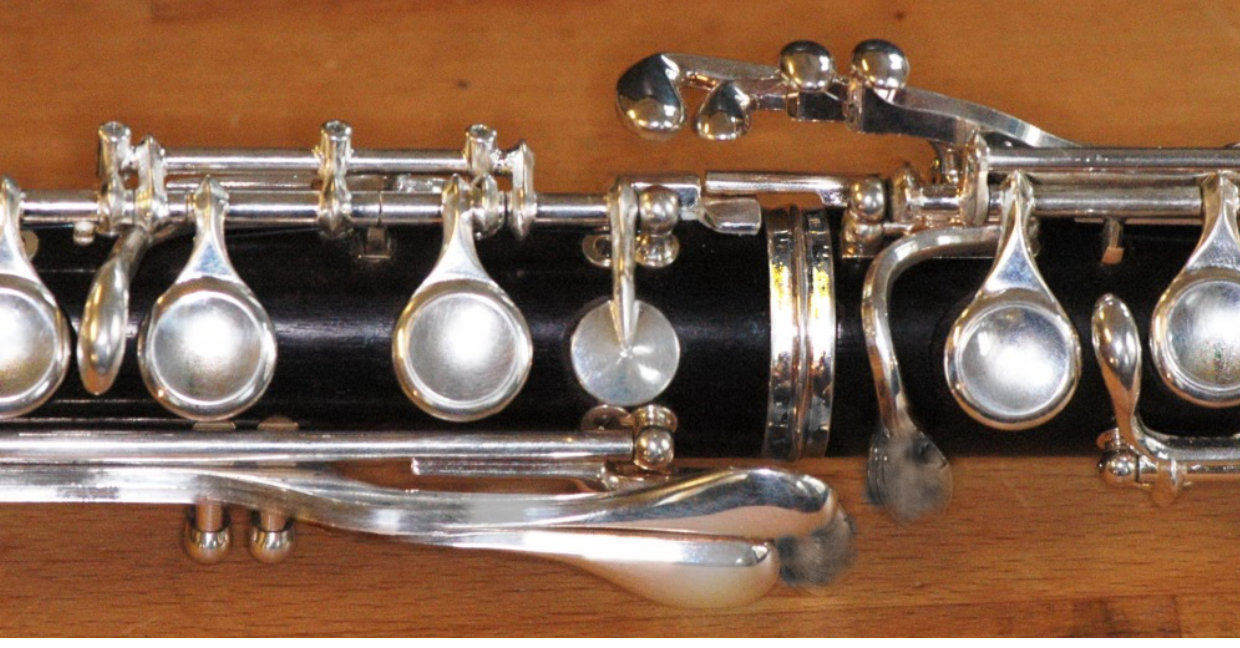 Plateau systems in general
Plateau key systems are the big exception on the clarinet today. All clarinet makers offered them in the 1930s. They were popular among doublers, musicians who played the clarinet and saxophone.
However, since the system is relatively complicated and therefore much more expensive, all companies stopped production. Another problem was the problematic acoustics. The sound was often too closed and muffled.

But there can be very good reasons to have the ring keys changed to closed or plateau keys. We have been offering fully and partially customized clarinets with closed/plateau keys since the 1990s and they are even played by top players in national orchestras, by professors and great military bands. They are also sometimes called jazz or plateau clarinets .

Suitable for
The plateau system has its advantages and is often the only way to overcome some ergonomic problems. It is extremely interesting for 4 groups of players.

1. Military, police and guard orchestras when they have to play outdoors in winter because plateau clarinets allow playing with gloves.
2. For saxophonists , because the covered holes feel more familiar
3. For players with very small hands . The tone holes no longer have to be covered precisely, which can be problematic for small hands and, above all, very narrow fingers.
4. Players with hand handicaps such as:

LP plateau system
The LP plateau system has solved the acoustical problems from the past. The player doesn't need to relearn anything. The instrument sounds like any ordinary ring key instrument. This can either be done for all ring keys or only for individual keys.

What is all included?
The conversion includes all necessary work such as modifying the tone hole, new dimensioning of the tone hole, converting all the keys in question to covered hole keys, adding extra bridges and mechanism to allow the correct connections, padding, adjusting, and tuning. These conversions are possible for Bb, A, C, G as well as Alto clarinets.
Additional work such as an overhaul of the rest of the instrument or silver-plating will be charged separately.

Things to consider
We can convert all or just some of the keys to the plateau system. For the left hand, this can be done key by key without any problems.

If you need to get one or more ring keys converted for your right hand, we will always recommend doing all 3 at once. Technically it would be possible to just convert one key, but we would need to rebuild the entire right hand since all ring keys are connected. Converting only one key for the right hand could also cause some serious hand coordination problems. The plateau key would be higher than the ring keys and be touched by your finger first which could cause uneven finger timing.

When the reason for the conversion is caused by a medical condition, discuss it with your doctor and ask for the expected progress.

Transferring the keys to another instrument
If you should decide at one point to replace your instrument with another one, we can transfer the keys to the new one.

Can the conversion be reversed
It is always possible to reverse the conversion and return it to its original ring key system.
Help us to get better
Was this article helpful?