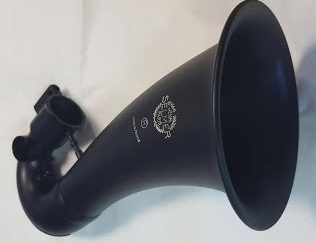 We offer the possibility of plating the keys either with Black Nickel or Black Chrome. It gives the keys the same color as the body. This is a purely optical effect without any influence on the sound. It looks very special and requires special attention whenever we work with these keys since imperfections will be easily visible. Since nickel, as well as chrome, can cause allergies we offer an additional lacquer coating that will prevent the player from having any direct contact with the nickel or chrome.

Nickel can't be digested and will be slowly stored in the kidneys and liver. Once a certain level is exceeded, the body might react aggressively, resulting in an allergic reaction. Skin irritations and discolorations, insomnia and even depression are observed. Due to the enormous increase in such reported cases, the sale of nickel or nickel-plated products is restricted or even banned in some countries. Our recommendation is clearly to avoid nickel plated instruments.

Here is a peer-reviewed and edited version of a paper delivered at NASF SUR/FIN 2013 in Rosemont, Ill., on June 12, 2013.
"Nickel dermatitis (skin allergy( is a growing problem in numerous countries. The alarming frequency of sensitization to nickel, especially in the US, has caused nickel to be selected as the Allergen of the Year in 2008 by the American Contact Dermatitis Society. Nickel as a coating in contact with the skin has already been regulated by the nickel EU directive [94/27/EC] since 1994.

Introduction to Nickel dermatitis
Nickel allergy or nickel dermatitis is one of the most common types of contact allergic dermatitis. In many countries, electroplated nickel coatings have been banned in applications involving direct and prolonged skin contact. This is also the case when a nickel substrate or a nickel-plated surface is coated with a protective layer of another metal such as chromium, gold, silver, or a thin organic coating/paint. The reason is that even small pinholes, scratches, or other defects in the protective layer may cause the release of nickel ions by corrosion. This is especially the case when the corrosion is accelerated by a galvanic coupling with other metals and in the presence of a sweat-induced electrolyte containing among others chloride, lactate, or ammonia ions. Nickel ions form a lactate complex as well as ammonium complexes, which significantly increases the corrosion speed of nickel by reducing the thermodynamic stability of nickel."